Your time – My time 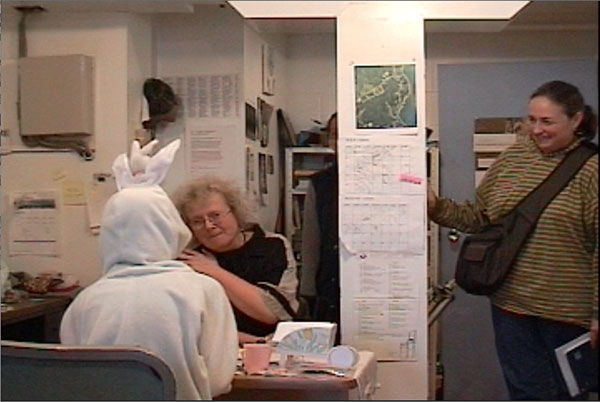 Once we have made a plan such as the deadline and promise with friend or family, we keep it in our mind not to forget it. It may be a plan that you look forward to, but it may be not. The plan makes people feel something but we can’t see the might of the plan. Then I thought this feeling could be controlled by someone (who may be ourselves or may be other) to disturb us.

In this project I made a promise with unspecified number of people in the following way; I made small notes that showed when and where to meet up and I drew rabbit’s mark on these notes. And I put them into stranger’s bags or mailboxes stealthily. I’m sure that some of them thought about the notes several times until the appointed time. It means that I could steal some of their time.

On appointed day, I had been waiting for “somebody” in a stuffed bunny suit during the day. The rabbit is pretty and cute, but on the other hand they are nervous and sly so I thought the bunny was the very character for this project.  Some people actually came and saw me. I talked with them for a while and I gave the certificates saying “I stole your time”. I couldn’t imagine how many people would actually come. I had been just waiting for someone. I finally realized that my time was also stolen by “someone”.