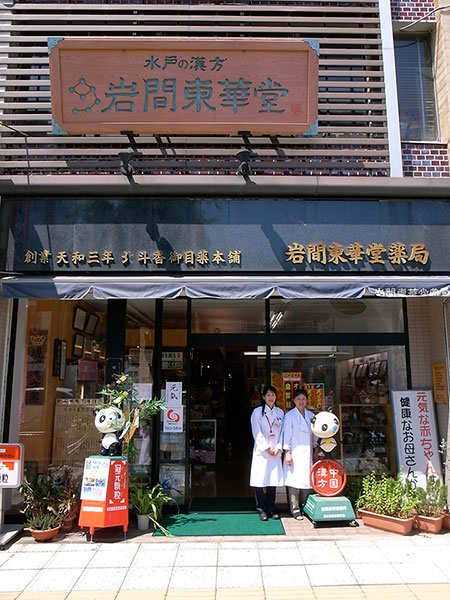 Two days later after I arrived in Mito, I found this panda. He had got a cross mark on his nose saying “Don’t be naughty to me”. Since I saw him, my head had been full with that panda. I really wanted to heal his nose.

Finally I could speak to the owner of Iwama pharmacy. All the staffs loved Panda like me, our conversation got lively, how they looked after him carefully and how much they loved him. One of the staffs took the cross mark off from his nose, and I found out that his nose was broken to pieces… I was really shocked… The staffs told me that a schoolboy hit his bag to panda’s nose then it smashed to pieces… I finally understood why the cross mark said “Don’t be naughty to me”. They also told me that this panda is very popular among local residents because he has this cross mark so I decided to keep the cross shape on his nose. There was also a stain on his tummy so I made a tummy cover too. I used a Oyster card's case, yellow rubber tag and shoulder strap of swimming costume for covering this panda's scars. When I picked this Oyster card's case on the street in Bricklane, one guy said to me “Oh, I was just about to pick it up, but I will offer it to you.” Now this case protects this sweet panda’s nose in Mito from another attack