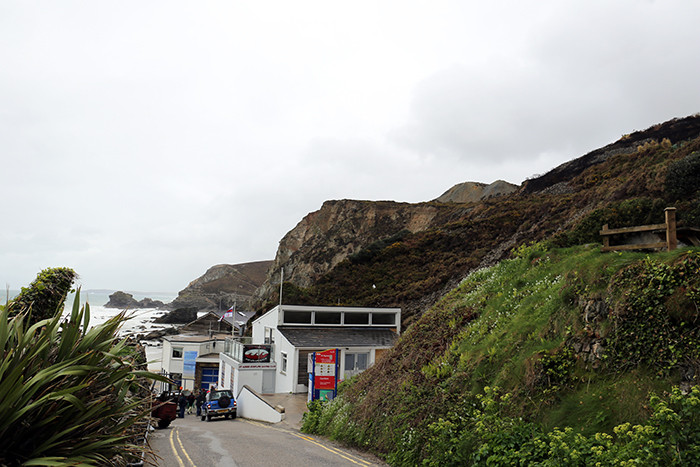 <Legend of Bolster giant>
Giant Bolster must have been of enormous size: since it is stated that he could stand with one foot on St. Agnes’ Beacon and the other on Cairn Brea; these hills being distant, as the bird flies, six miles. In proof of this, there still exists, in the valley running upwards from Chapel Porth, a stone in which may still be seen the impression of the giant’s fingers. We hear but little of the wives of giants; but Bolster had a wife, who was made to labour hard by her tyrannical husband. Whenever Bolster was angry with his wife, he compelled her to pick stones, and to carry them in her apron to the top of the hill. The giant Bolster fell deeply in love with St. Agnes, who is reputed to have been singularly beautiful, and a woman of great virtue. The giant allowed the lady no repose. He followed her incessantly, proclaiming his love, and filling the air with the tempests of his sighs and groans. The persecuted lady, finding there was no release for her, while this monster existed, resolved to be rid of him at any cost, and eventually hatched a plan. The Knight Sir Constantine and local dignitaries searched for the Giant Bolster to face him in a fight to the death, but the challengers were easily overcome in a showdown at Chapel Porth. Agnes pretended to be persuaded by the intensity of the giant’s love, but she told him she required yet one small proof more. There exists at Chapel Porth a hole in the cliff at the base of the valley. If Bolster would fill this hole with his blood the lady would no longer look coldly on him. This huge bestrider-of-hills thought that it was an easy thing which was required of him, and felt that he could fill many such holes and be none the weaker for the loss of blood. Consequently, stretching his great arm across the hole, he plunged a knife into a vein, and a torrent of gore issued forth. Roaring and seething the blood fell to the bottom, and the giant expected in a few minutes to see the test of his devotion made evident, in the filling of the hole. It required much more blood than Bolster supposed, and so he bled on. Hour after hour the blood flowed from the vein, yet the hole was not filled. Eventually the giant fainted from exhaustion. The strength of life within his mighty frame enabled him to rally, yet he had no power to lift himself from the ground, and he was unable to stanch the wound which he had made. Thus it was, that after many throes, the giant Bolster died! The cunning saint, in proposing this task to Bolster, was well aware that the hole opened at the bottom into the sea, and that as rapidly as the blood flowed in, it flowed out into the ocean.